by Joshua Oliver in London and Miles Kruppa in San Francisco via ft.com 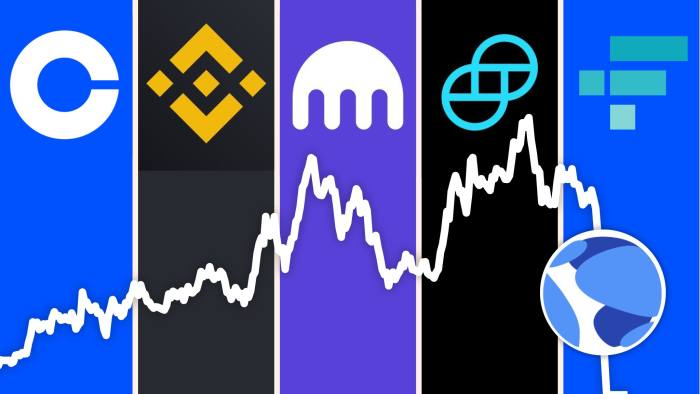 Please use the sharing tools found via the share button at the top or side of articles. Copying articles to share with others is a breach of FT.com T&Cs and Copyright Policy. Email licensing@ft.com to buy additional rights. Subscribers may share up to 10 or 20 articles per month using the gift article service. More information can be found here.
https://www.ft.com/content/5a3b6fe9-329c-4c97-9f2b-3b00edeb0618

The $40bn collapse last week of popular crypto token Luna underscores the crucial role exchanges play as gatekeepers that rule on which digital assets are readily available to mainstream traders. Fierce competition among exchanges has led to a sharp rise in the number of tokens available on platforms that are popular with have-a-go investors. But the risks of listing newer tokens — and the lack of regulation around these assets — was highlighted last week when terraUSD, a coin that promised to match the value of the US dollar, became nearly worthless, also wiping out the value of its sister token Luna, in what research firm CryptoCompare called “the largest destruction of wealth in this amount of time in a single project in crypto’s history”. Their collapses have focused attention on the standards exchanges apply when they decide to list a coin. Unlike the stock market, regulators play little to no role in overseeing the issuance and trading of tokens in most jurisdictions. “I think the whole industry needs to set a high bar when it comes to evaluating whether they list or invest in stablecoins that are backed by things like algorithms,” said Lennix Lai, director of financial markets at OKX, a crypto exchange. Major exchanges, including Coinbase, Binance, OKX and Crypto.com, which previously let their customers buy Terra or linked tokens, halted trading during the crisis. The first port of call for many novice crypto investors are mainstream exchanges such as Binance and Coinbase that say they vet tokens before they are made available to their millions of users. “It’s true that we are listing more and more assets than we ever have before,” said Paul Grewal, chief legal officer of Coinbase, during an interview in April. “At the same time, there are many, many more assets available for consideration and submitted for consideration than there ever have been before.” Grewal said Coinbase rejected “many, many more assets” than it approved. In March, it added 24 new assets for trading out of 160 that applied for consideration, he said. In total, Coinbase listed 164 coins as of April, up from 28 in July 2020, according to the most recent data from CryptoCompare. Offshore exchanges FTX, Bitfinex and Binance list more, but their stable of coins has grown more slowly. Traders’ enthusiasm to access the latest popular token places pressure on exchanges to list more assets. Exchanges’ decisions also wield huge influence over which tokens gain traction. New listings on Coinbase often spike in price as more traders gain access to the tokens, a pattern that some analysts have called the “Coinbase effect”. “All of a sudden, there’s this massive influx of liquidity when you list a token on an exchange like Coinbase,” said Roberto Talamas, a researcher at the cryptocurrency data company Messari. FTX chief executive Sam Bankman-Fried has said that as few as 50 crypto coins appear to have real value. But most exchanges, including FTX, list several hundred assets. Most jurisdictions have little if any legal standards on what crypto tokens can be publicly listed for regular people to trade, so exchanges serve a key role in scrutinising coins. “If you were in a world that was regulated, you would be held accountable for the products you put on your exchange,” said a senior executive at a large European crypto group. James Kaufmann, partner at law firm Howard Kennedy, said regulation provides stock exchanges with a clear set of listing criteria to enforce, whereas crypto markets operate on the basis of “buyer beware”. “The clue is in the name isn’t it: is it a crypto exchange or a stock exchange?” he said. Binance chief executive Changpeng Zhao has said he would like to see regulators provide guidelines on token listings. But so far the world’s largest exchange has relied on “crowd intelligence” to decide which coins to list, he said in an interview in March. “Very often the crowd is a better judge than ourselves,” Zhao said, adding that a coin’s number of users is the most important criteria for whether Binance will list it. In a blog post on its listing regime, Binance said it also puts tokens through “rigorous due diligence”. Gemini, the exchange owned by the billionaire Winklevoss twins, said it aimed to list digital assets demanded by customers but also tries to protect its clients from dangerous tokens. “If we think there’s a genuine threat to our customer funds being at risk, then we would not move forward,” said Brian Kim Johnson, general manager of the Crypto Core team at Gemini. The scrutiny on what standards exchanges apply when they decide to list a coin comes as the strategy of adding more coins to drive growth shows signs of faltering. Buying and selling in smaller tokens helped fuel a sevenfold increase in trading volume on Coinbase last year. However, trading in what the exchange calls “other crypto” fell by more than half in the first quarter, down from greater than $370bn in the last three months of last year, according to Financial Times calculations. The category includes tokens other than bitcoin and ether, which did not suffer similarly large declines in trading. Coinbase CEO Brian Armstrong said last month the platform planned to create a system for users to rate and review new digital assets, similar to product reviews on Airbnb or Amazon. Coinbase thinks the system can “help create additional consumer protections in crypto”, he said. Additional reporting by Scott Chipolina