Via FX Street by Jonathan Morgan

Bitcoin price sees bulls swallow up the entire trading range of the past eight days. Ethereum price hits $3,000 and extends the intraday bull rally above $3,100. XRP price prepares for launch to hit $1.00.

Bitcoin price readies for spike towards $50,000

Looking forward to February 20, the top of the Ichimoku Cloud (Senkou Span B) falls to $42,500 from the current $49,500. As a result, it is increasingly likely that Bitcoin could trade sideways between the 61.8% Fibonacci retracement at $41,000 and the 2022 Volume Point Of Control at $43,000 until February 20 before positioning for an Ideal Bullish Ichimoku Breakout above the Cloud. 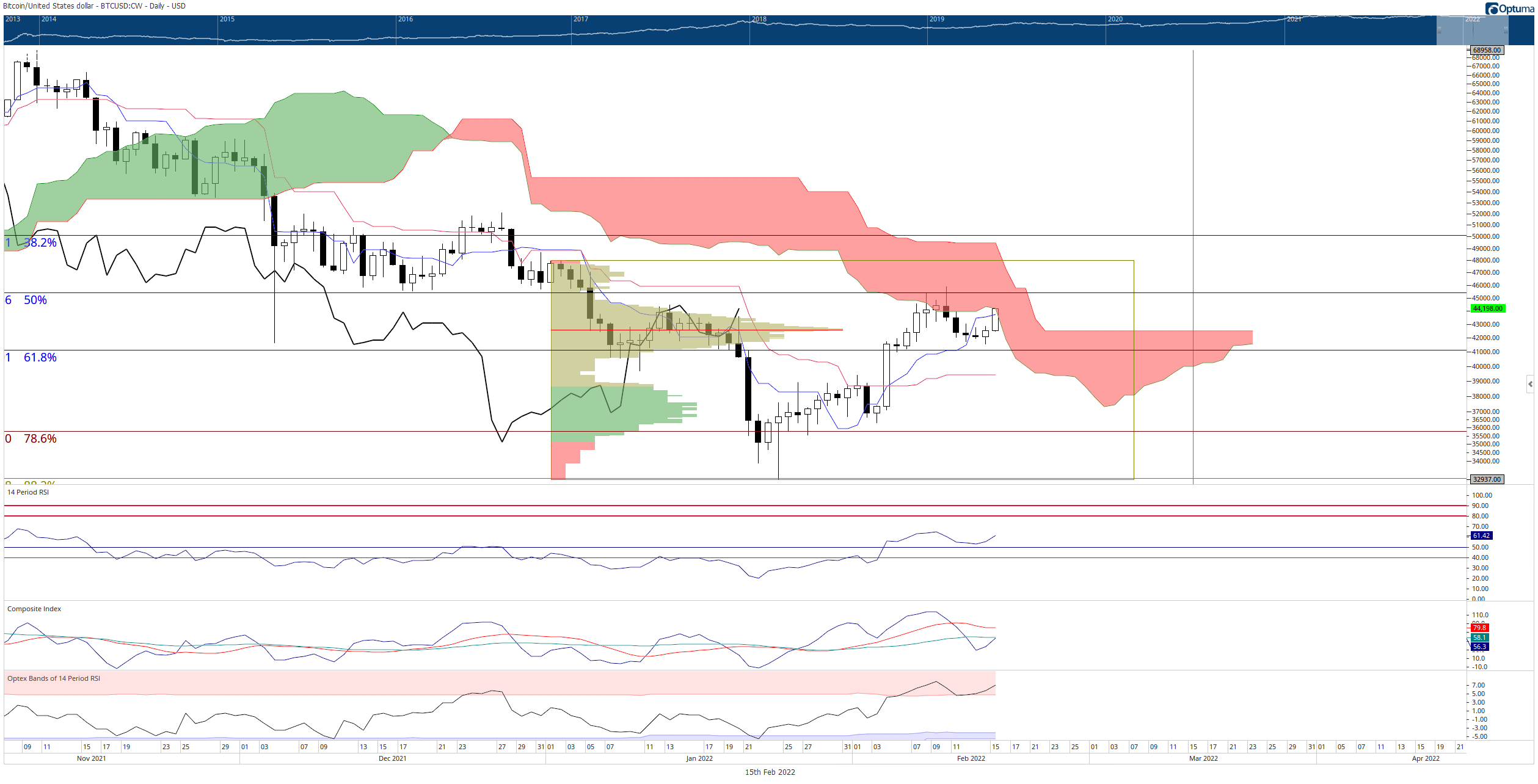 However, downside risks remain. On the daily chart, there is one final Ichimoku support level – the Kijun-Sen at $39,400. If Bitcoin price closed below that level, a return to the 2022 lows near $33,000 is almost inevitable.

Ethereum price action has been highly bullish during the intraday session on Tuesday. While this current early bullish expansion move was not unexpected, there were concerns that it could retrace to the $2,700 value area before beginning a run towards $4,000.

The inverse head-and-shoulders pattern identified on February 12, along with the bullish divergence in Ethereum’s oscillators, all remain in play and structurally unchanged. Etheruem price could dip to the 61.8% Fibonacci retracement at $2,500 before finding a swing low, but it would threaten to cancel the hidden bullish divergence present between the candlestick chart and both the Composite Index and Optex Bands.

The hidden bullish divergence became more extended, enhancing the strength and likelihood of a swing low developing very soon. However, if bulls establish a new swing low in the $2,500 to $2,700 price range, they still need to contend with a massive cluster of resistance in the $3,150 to $3,300 value area. The 2022 Volume Point Of Control, top of the Ichimoku Cloud (Senkou Span B), 38.2% Fibonacci retracement, and lower trendline of a prior bear flag exist within that $3,150 to $3,300 price range. 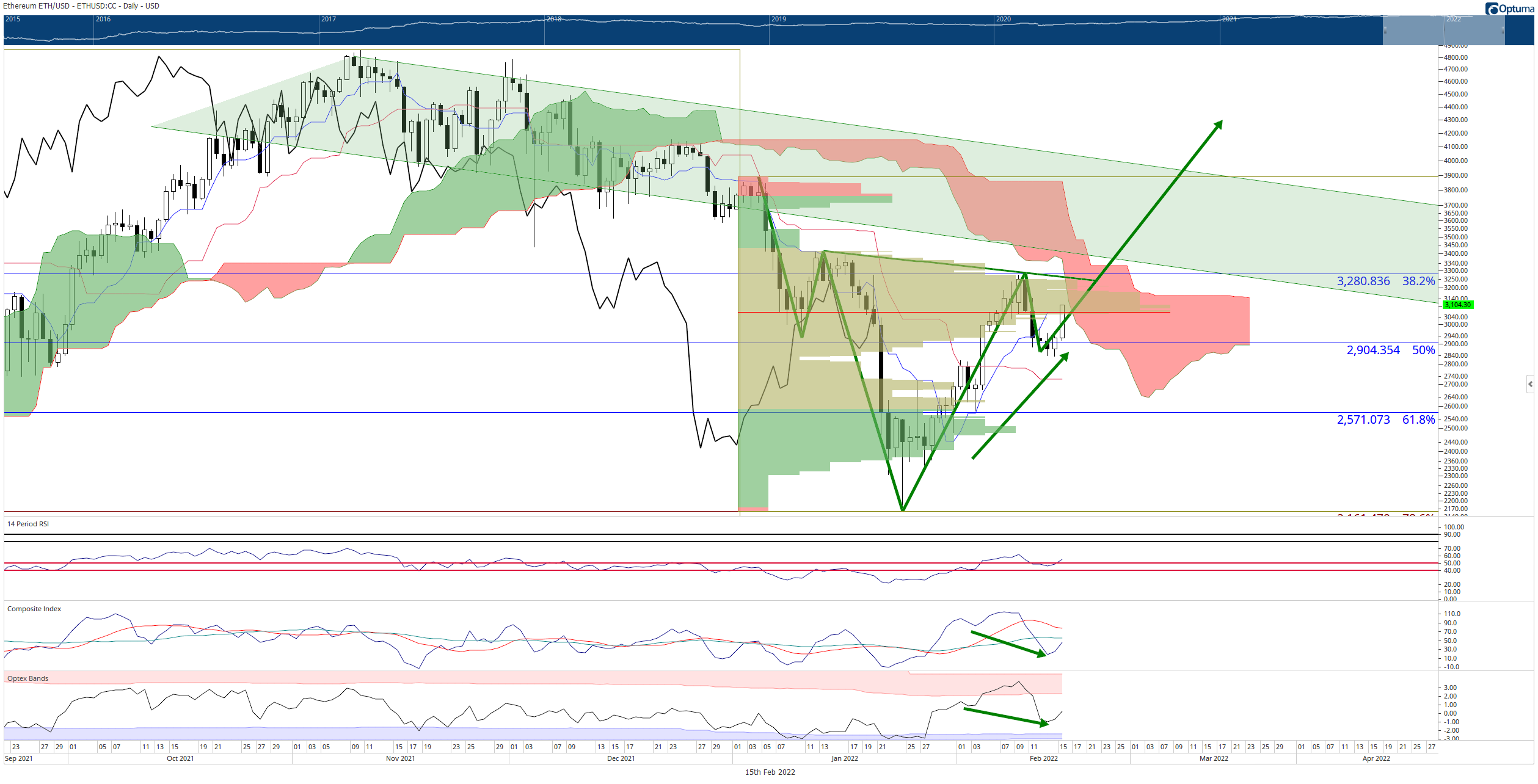 Bulls and bears will want to watch for any daily close below the 61.8% Fibonacci retracement at 2,500 as it would signal a highly probable sell-off to retest the 2022 low near $2,100.

XRP price triggered a hypothetical long entry on February 11 but dropped below that level over the past four trading days. However, that prior trade setup is still valid and provides an opportunity for traders who missed it to take advantage of that setup.

The theoretical long opportunity for XRP price was a buy stop order at the three-box reversal, which triggered $0.84. That theoretical long entry is still valid as XRP is currently trading near $0.81. The stop loss is at $0.78, with a profit target at $1.58. Profit-taking will likely occur before the projected profit target, near a former dominant subjective trendline (black diagonal line) around the $1.15 value area.

Downside risks, however, do remain. A daily close below the Kijun-Sen at or below $0.73 would likely indicate a resumption of the prior bear market for XRP and confirm a massive bull trap. Moves exceeding the $0.50 level would be all but a forgone conclusion.